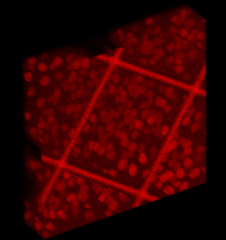 The image reveals nuclei of layer IV neurons, immunostained for beta-galactosidase activity, in the barrel field of mouse somatosensory cortex. Beta-galactosidase activity is conferred upon Emx1 homeobox gene-expressing cortical neurons due to 'knock-in' of a LacZ cassette. The 'bars' in the image result from application of a 113 x 113-micron TEM square grid; the grid was used to create an optical dissector probe for stereological analysis of Leica SP2-acquired confocal images. The movie file was created from a series of orthogonal projections attained using a plug-in for the Leica Confocal Software. The average size of the neuronal nuclei is about 6.0 microns, and the section thickness is 40 microns. Image capture was performed with 20x objective lens and zoom-in options.