Adolph Hitler and Dietrich Eckart: Obersalzberg to Hoher Goll No. 22 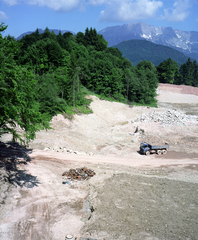 "Adolph Hitler and Dietrich Eckart: Obersalzberg to Hoher Goll" is a series of photographs that retraces a hike by Hitler and Eckart to the Hoher Goll Mountain in Southern Bavaria. Significantly the hike starts off at the ruins of the Obersalzberg compound where the Nazis constructed a second seat of government and where, years earlier, Hitler had purchased a summer home. After years of neglect the site today is the future home of a new 4-star Intercontinental Hotel. This particular photograph depicts the creation of a parking lot for the motel. The blocks of concrete in the photograph are the remnants of the bunkers used by the SS unit that provided security. The original images were shot on medium format film and scanned using the VMIL's high-resolution film scanners.