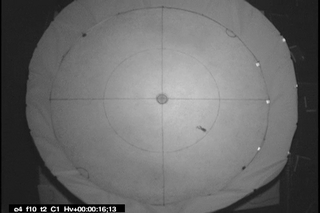 The image shown here is a single frame from a short video of an experiment involving the Eastern Gray Tree Frog (Hyla versicolor) and auditory cues which simulate the mating call of this species. In this video, the female makes the journey towards her synthetic mate in roughly 12 seconds, though travel times of 20-30 seconds are more common. The experiment, as designed by Kevin Christie of Dr. Albert Feng's research group, hopes to answer some of the following questions in multi-scale sensing: How does the responsiveness of the female scale with the apparent distance to the male's call? Is there evidence to indicate that the female is able to discriminate and localize the signals? Do females have a measurable physiological response to these specific auditory stimuli? A female [i]H. versicolor[/i] is placed within the center of a grid-marked, two meter diameter chamber. A small speaker (the black, rectangular region located at 4 o'clock) emits a synthetic mating call which should attract the female towards the apparent male. The experiment is then repeated varying the broadcast level of the cue to simulate distances between the female and male of one meter to 75 meters. Each video recording of the experiment is used to measure the reaction of the frog, its progress towards its goal, and the final directionality of travel. From this data, conclusions can be drawn about the suitability of a single auditory stimulus for eliciting a response within the female.