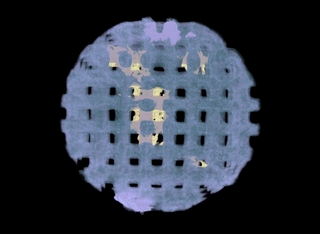 The following image is an update on the research described in a previous a previous Image of the Week entry on the 26th of October 2004. Seen here is a complete hydroxyapetite bone scaffold after eight weeks as an implant in living tissue. The light purple coloring is the scaffold itself, while the yellow is bone that has grown in the scaffold. The scaffold was imaged using the SkyScan 1172 micro-CT system, and the image was created and analyzed using Amira, both in the VMIL.