Collapse of a Supermassive Star 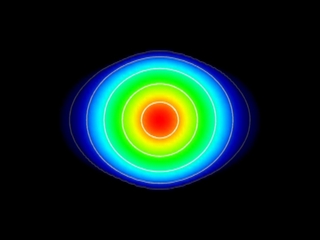 This image is taken about halfway through a video sequence depicting the one-month collapse of a star a million times more massive than the sun. The image shows the color-coded density profile in the plane containing the rotation axis of the star. The data comes from a relativistic simulation conducted by physics and astronomy professor Stuart Shapiro and his collaborators. The simulation follows a supermassive star on its eventual collapse to a supermassive black hole. Such a collapse is a plausible mechanism by which the supermassive black holes at the centers of galaxies (including our own) can form. The data was visualized by an undergraduate research team supervised by Professor Shapiro. The group used AVS, a scientific visualization package, to generate the plots and the Avid Media Composer system in the VMIL. See http://www.physics.uiuc.edu/research/cta for more information and other astrophysical simulations.