Cover for 2nd Ed. of Handbook of Nanoscience, Engineering, and Technology 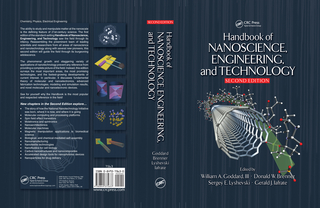 The image is of the cover of the 2nd edition of the Handbook for Nanoscience, Engineering, and Technology from CRC Press, which will be published this Thursday, April 26, 2007. The book, whose first edition cover was also produced by ITG, is seen as perhaps the definitive reference for nano researchers worldwide. Its content includes work by a number of current and former Beckman faculty and students, including Narayan Aluru, Karl Hess, Jean-Pierre Leburton, Umberto Ravaioli, Slava V. Rotkin, Trudy van der Straaten, William McMahon, Blair Tuttle, and Martin Staedele. The front cover is from a molecular dynamics simulation of the structure of the hybrid of a single-strand of DNA wrapped around an armchair single-wall carbon nanotube, having modified electronic properties because of the wrap. The back cover (left) shows a 3-D simulation of a nano-arch termination/zipping of a graphite crystal edge whose structure may serve as an element for a future nanodevice, and as a template for nanotube growth. The back cover (right) shows five figures explained within the text. The primary cover image was created using a combination of tools within the Visualization, Media, and Imaging Laboratory, including Cerius[sup]2[/sup], mol2mel, and Maya. Mol2mel is an ITG software package that supports conversion of .mol molecular formats into Maya models. Maya was used for the coloring, lighting, additional modeling, and rendering of the image. Cover design by Benjamin Grosser, Imaging Technology Group, Beckman Institute for Advanced Science and Technology, University of Illinois at Urbana-Champaign, and Slava V. Rotkin, Department of Physics, Lehigh University. DNA nanotube image (front) and graphite nano-arch simulation image (back left) by Grosser and Rotkin; data by Rotkin. Small figure images by (from top to bottom): 1) T. van der Straaten; 2) Rotkin and Grosser; 3) Rotkin and Grosser; 4) B. Tuttle, Rotkin, and Grosser; 5) Rotkin and M. Dequesnes. Background image is an SEM image of aligned arrays of single-walled carbon nanotubes on miscut single crystal quartz by Coskun Kocabas, John A. Rogers, and Moonsub Shim, University of Illinois at Urbana-Champaign.