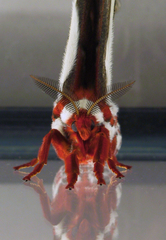 This female Cecropia moth (Hyalophora cecropia [Linnaeus]) hatched from a cocoon found on a tree here in Urbana, Illinois. The females are characterized by longer, narrower antennae and wider, more &quot;plump&quot; bodies. The males (of which another collected specimen hatched two days prior to this one) have bushier, thicker antennae useful for locating the females. The adult moths of this species do not feed: they exist solely to reproduce the next generation and will die within a few days after hatching or mating. This female was released on an apple tree immediately following the capture of this image, and by the following morning had attracted a mate (not pictured.) The two remained joined throughout the day, finally separating later in the evening: the female to lay small clusters of eggs on suitable host plants; the male, to almost certain death within hours, though a small percentage have been observed mating again. This image was acquired using a Canon G1 digital camera, and was illuminated using professional tungsten lamps. The cage is a simple glass aquarium surrounded by white foam-core poster board to provide even back-lighting. Little post-processing to the image was done, mainly involving cropping of the image to more properly center the subject in the frame.