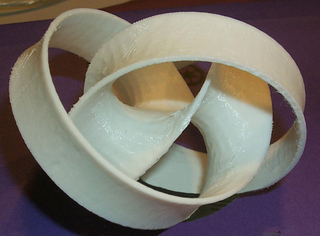 The 1998 sculpture, Atomic Flower II, by Brent Collins consists of a central disk (perhaps representing a nucleus) with three looping arcs around it (the electrons). Like many of Collins' pieces, the sculpture has interesting rotational symmetries, and its surface is everywhere saddle shaped (like a soap film or minimal surface). Intrigued by this sculpture, John Sullivan recreated an approximation of its shape on the computer, by joining three helices to construct a boundary curve and then using Ken Brakke's Surface Evolver to numerically simulate a soap film spanning this boundary. The object shown here is a physical model printed with the Genisys Xs solid object printer in the VMIL. The image was acquired using the Kodak DCS330 digital camera.</caption>