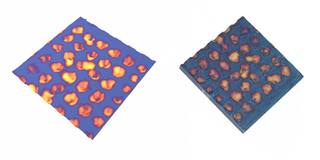 Platinum circles were patterned on Silicon using the Focused Ion Beam at MRL. The patterned substrate was etched chemically to generate porous silicon and the AFM image shows the topography of the etched sample. Craters were formed in the region where the Pt was initially deposited. The luminescence of the sample was recorded using Multiphoton Microscopy. Maya was used to make a 3D model out of the AFM and Multiphoton images. The 3D model correlates luminescence with topography and helps to understand from where the luminescence is originating. The rendering on the left was created by Sotiri Koyonos for Soma Chattopadhyay using Maya. The 3D print on the right was made using the ZCorp Z406 in the VMIL, directly from Maya and the top2maya MEL script written by Rob Gillespie. The two images together demonstrate that not only can two differing imaging modalities be merged graphically to demonstrate something new, the solid model provides an opportunity to investigate properties of the structures macroscopically away from the AFM and Confocal microscopes.