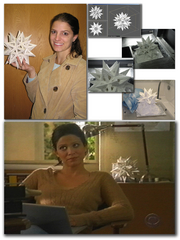 A lighter Image of the Week for this Halloween, 2006. The popular TV show "NUMB3RS" is a serial drama concerning FBI agent Don Eppes (Rob Morrow) and his brilliant "Cal-Sci" professor brother Charlie (David Krumholtz) who team up to solve crimes using advanced mathematics. What many people do not know is that this series has a local connection. Champaign-based Wolfram Research, makers of the Mathematica line of computational software, frequently consults for the series by reviewing scripts to ensure the plausability of the plot, to suggest changes or potential tie-ins with other research conducted at the U of I, and to provide lots of Mathematica-related props to serve as office decorations for the Charlie Eppes character. The ITG was contacted to build a model of their "Spikey" logo, which was eventually shipped to CBS and has been featured on the show numerous times, as seen here behind actress Navi Rawat. The process was documented by consultant-emeritus Michelle Wetzler (pictured holding Spikey) through the various stages of layout, excavation, depowdering, and treatment, some of which are shown here. The model Michelle is holding can be seen in the background in Charlie's office on occasion, along with other Wolfram-supplied products. NUMB3RS - and Spikey - can be seen on the local CBS affiliate WCIA Friday nights at 9pm. For more information on Wolfram Research's involvement, please see this article in the News-Gazette.