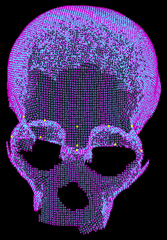 Regular visitors to the ITG's web site and to the ITG Forum will recall that Jodi Blumenfeld (Ph.D. student in the Department of Anthropology) has begun research that attempts to quantify the differences in skull development between hominin species and two chimpanzee species. This latest image was rendered in the animation package Maya, and is of the skull of a juvenile chimpanzee displaying 3D cranial and superorbital landmarks as yellow markers. The landmarks are placed in consistent locations on the skulls in order to ascertain developmental differences between the species. The 3D surface of the skull was acquired through the use of the ITG's Eyetronics ShapeCam system. The ShapeSnatcher and ShapeMatcher software reconstructed the shape of the skull from multiple 2D photographs of projected grids upon the surface of the skull. Maya was used to render the skull and as an aid for placing and locating the coordinates of the landmarks. This particular specimen is part of the Hamann-Todd collection at the Cleveland Museum of Natural History. Access to the chimpanzee specimen was kindly provided by Dr. Y. Haile-Selassie at the CMNH.