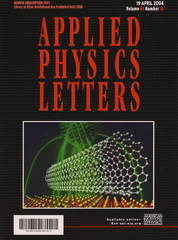 The image displayed here comes from the cover of the current issue of Applied Physics Letters (Volume 84, Number 16). The image was created by Slava Rotkin and Benjamin Grosser to demonstrate the setup of an armchair single wall carbon nano tube metallic field-effect transistor using an STM tip as a modulation gate. The image was created using Maya in the VMIL. The abstract of this work is as follows: "We develop theoretical arguments that demonstrate the possibility of metallic field-effect transistors in one-dimensional systems and particularly in armchair carbon nano tubes. A very in-homogeneous electric field, such as the field of a tunneling tip, can penetrate the relatively weakly screened nano tubes and open an energy gap. As a consequence, an energy barrier forms that impedes electron flow and thus permits transistor action. This type of metallic field effect is advantageous because of the high conductance of the metallic tubes in the ON state."