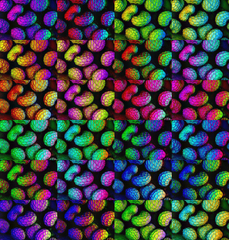 The objects depicted in the 24 panels of this image are poppy seeds, magnified roughly 80 times. One of the colored panels was selected to be a part of the stereoscopic magnification animation used during the 2002 Beckman Open House. Here's how the image was created: A total of four different images were acquired using the diode-switching backscatter detector on the ESEM. These four images were combined by selecting three of them at a time and inserting them into the red, green, and blue channels of a 24-bit RGB image respectively. 24 different unique permutations result (4_P_3), as seen here. The IRIX software used to create the image is called slugbug, and is used to survey the colorized options. High-resolution versions can be selected by clicking the mouse (slugging) on each panel. The software was developed by Daniel Weber for initial use with the Bugscope Project (hence the bug;).