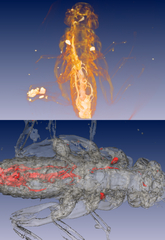 The Imaging Technology Group recently installed a SkyScan 1172 100kV x-ray MicroCT system in the Visualization, Media, and Imaging Laboratory. The new system features a 10Megapixel (4000x2300) 12-bit digital camera, a 68mm horizontal field of view, and a specimen resolution of approximately 5um. Watch the web site for further announcements. To confirm correct operation of the new system, a small, 1.3cm beetle was surrounded in a small envelope of parafilm (to provide support during scanning), placed on the sample stage, and scanned at low resolution. Despite the sample's desiccation, the reconstructions shown here clearly illuminate some of the specimen's internal organs. The initial volumetric reconstruction was accomplished using the cone-beam volumetric reconstruction software provided by SkyScan. The volumetric and isosurface images (top and bottom images, respectively, shown in two differing orientations) were created using Amira 3.1.1. All of the equipment and software required for the development of these images resides in the VMIL.