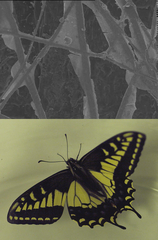 On March 5, 2002, second graders at St. Paul's Elementary School in San Francisco, California, acquired this image (top) of the surface of a Western Swallowtail ([i]Papilio rutulus[/i]) chrysalis as they participated in Bugscope. The strands stuck to the surface are remnants of the silk used as anchors to hold the chrysalis steady while the butterfly inside matures. Surprisingly, this chrysalis remained viable after being shipped to us through the mail from San Francisco, being subjected to the rigors of sputter coating with gold/palladium, and spending several hours inside the vacuum of the ESEM. She hatched on Monday, March 25, 2002.